My name is Irina Zaykovskaya and I graduated from Michigan State University with a Ph.D. in Second Language Studies in May 2019.

During my time at MSU, I taught various courses, such as Second/Foreign Language Learning, Pedagogical Grammar and Russian Language.

With a background in Linguistics, Russian and EFL teaching, I started at MSU in 2014 as a complete novice in Second Language Acquisition. Initially, my scope of professional interests was very broad, but over the course of the last couple of years, I was able to narrow it down to the sociolinguistic aspects of SLA, ranging from the variationist approach to the issues of identity and language ideology. 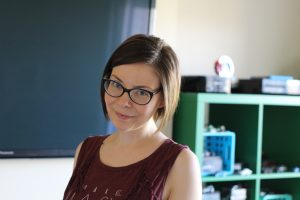 I am originally from St. Petersburg, Russia. Fortunate to have been born into a family with a particularly high number of post-graduate degrees per capita, I had little choice but follow suit. I received a Bachelor’s degree in Russian and English languages, a Master’s in Philological Education with a concentration in Linguistics and Russian, and then yet another degree in the Russian Language, a Russian equivalent of a Ph.D. called Candidate of Sciences, all from the Herzen State Pedagogical University of Russia.

I began teaching right after obtaining my B.A., starting as an Assistant Lecturer and later being promoted to Senior Lecturer and then Associate Professor at the Department of Foreign Languages at the Petersburg State Transport University. I taught a large variety of EFL courses, mainly English for Specific Purposes, such as Mechanical and Electrical Engineering, Automotive Service, Non-Destructive Testing, Logistics, Economics and Marketing. I also had an opportunity to teach content-based Russian as a Foreign Language classes to study abroad students from Durham University (UK).

On a personal note, I am fond of traveling (Italy is my favorite country to visit), aviation (I recently took a discovery flight on a Cessna 172 and went through ground school training), the Harry Potter universe (yes, I own a wand), and mysteries.

I live in Ann Arbor with my husband and two ridiculously fluffy cats, Gus and Scrat (named so for his resemblance to the Ice Age squirrel in both appearance and the trail of destruction he leaves in his wake).

and her professional self